Samantha Tucker: so funny, you’ll have a kidney stone 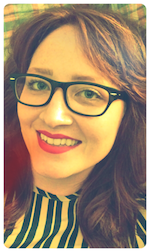 Ever wonder about the etiquette of nudity in a Korean spa? Samantha Tucker, a humorist and essayist enrolled in Ohio State’s Master of Fine Arts in Creative Writing program, has the answer. In her first collection of essays, The American Dream Starts Here, Tucker recalls visiting her first spa, being raised in America with a Korean sense of modesty, and teaching English in Korea. Throughout, she tackles difficult subjects like the death of her brother in Iraq, finding humor in even the darkest places. Tucker comes from a background of writing for performance, and that dynamic is omnipresent in her writing. She advocates diversity of voice in humor writing, labeling her writing as so funny it will give you a kidney stone, as happened to one of her professors.

Tucker’s work has appeared on Brevity, the Colorado Review, and The Toast. She has worked as a theatre and culture critic with other publications, including Show Business Weekly and Springs Magazine. Check out the interview to hear about Tucker’s humor writing, Tinder, and a short story from her upcoming collection. Tucker is submitting the final edits on The American Dream Starts Here for review in the coming months.

1 Response to Samantha Tucker: so funny, you’ll have a kidney stone