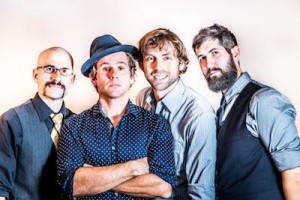 For Trent Wagler and The Steel Wheels, “Winter is Coming” and it doesn’t have anything to do with Game of Thrones. The band’s most recent album, Leave Some Things Behind, was released in April of 2015 and focuses on the classical idea of an odyssey. Regularly leaving and returning home as a touring band typically does, the band found themselves constantly in transit. They left friends and family back home while they went on cross-country adventures, soaking in innumerable experiences. Feeling almost like in-orbit astronauts looking back at their far-away blue marble, they captured the conflicting feeling of simultaneous departure and arrival over the course of an album.

Listen to our interview and then catch them in town on Friday, February 12 with Six String Concerts.

The band’s own curated Red Wing Roots Music Festival marks its fourth anniversary this year, boasting a lineup with bigger names like Shovels & Rope. After travelling as a touring band for years, the band wanted to bring some of those experiences home to their own community. The festival takes place July 8th-10th, 2016 in the National Chimneys Park in Mt. Solon, VA. More information about the festival can be found at their website.