Tim Dorsey and the coconut cowboy 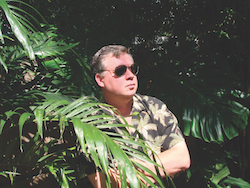 Coconut Cowboy is the 19th installment of New York Times Bestseller Tim Dorsey’s serial killer series, but don’t let that genre label fool you. Dorsey’s lethal central character, Serge A. Storms, prefers to be called a “sequential killer.” Where serial killers are “sick and compulsive,” sequential killers, like Serge, never intended to kill anybody, but is nearly forced to do so as “jerks cross his path.” According to Dorsey, “[Serge] doesn’t phone it in” when committing his murders, but rather acts as a “MacGyver of death. He’s able to pull together various things that are at hand,” Dorsey says. 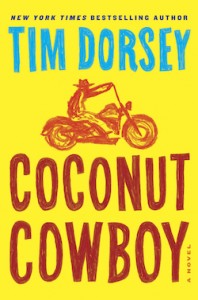 “[Storms’ murders are] some Rube Goldberg contraption that’s fitting, either for the crime or [it] has something to do with Florida or the location,” Dorsey explains. The geographic setting of the novels, always in Florida, provides natural inspiration for Dorsey. He often finds himself attracted to Internet headlines of bizarre crimes in the region. “You keep thinking it can’t get weirder,” Dorsey says, “but it continues to get stranger and with greater frequency.” His latest favorite story features a disgruntled fast food customer tossing an alligator through the drive-thru window at a Wendy’s restaurant.

Dorsey, an adamant believer in extensive book tours, enjoys taking in the specifics of small towns he discovers in his travels. These hidden treasures often make it into the book, like when Serge and a friend take a detour in Greenville to visit Ray Charles’ childhood home and a statue in the town square. “In addition to [Serge] being intelligent,” Dorsey explains, “he is encyclopedic about Florida and has this childhood enthusiasm [about the state]” For Dorsey, the immense number of strange locations in the state serve as the perfect backdrop for his absurd stories.

Though his books consistently sell, Dorsey has branched out his brand into other fields, including hot sauce. During a book fair, Dorsey made promotional t-shirts with fake hot sauce bottles printed on the back. After several fans asked how to purchase the hot sauce, Dorsey decided to make the spicy condiment a reality. The hot sauce, each bottle individually signed by Dorsey himself, is now available in three flavors. He also has merchandised hats, t-shirts, and a flask. And as Dorsey astutely points out, “Faulkner didn’t have this.”

Tim Dorsey will be at the Bexley Library on March 1st promoting Coconut Cowboy, which is now available at bookstores nationwide.