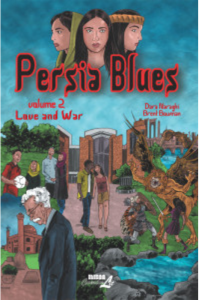 This past December, local graphic artists Dara Naraghi and Brent Bowman released Persia Blues Volume 2: Love and War on independent publisher NBM. The story interweaves ancient Persian mythology with the story of young Minoo Shirazi coming to The Ohio State University for graduate school. I spoke with Naraghi and Bowman for Craft on WCBE.

Andy Ross: Tell me a little about your collaborative process. How did you two initially become connected?

Dara Naraghi: We both were in a group called Panel. It’s kind of a loose collective of writers and artists. That’s where we originally met over ten years ago. Everybody [in Panel] had their own projects that they worked on, but we would also collaborate with each other and publish little comic anthologies twice a year. For the most part, every member of the group had worked with somebody else, except for the two of us. We never really did anything together. I knew his artwork, so when I came up with the idea for the book I thought of him.

AR: You talked about Panel. Do you think Columbus is conducive to graphic novelists and comic book artists?

AR: Dara, you’ve said that Persia Blues is your most personal work yet. Are there any elements that were drawn directly from your own experiences?

DN: I wouldn’t say directly, but a lot of them are composites of either my experiences with my parents, my cousins, or friends that I know. A lot of the themes are things that either I’ve experienced personally or just in general. It’s a common experience for Iranian Americans.

AR: How fully realized was your idea for the whole trilogy going into that first book and has it changed at all since that time?

DN: It definitely has changed.

BB: The middle part is always the hardest. You’ve got the beginning and the end, but you have to get there somehow and still make it interesting.

DN: The idea is to finish it this year. It will probably go on sale in early 2017.

Persia Blues Volume 2: Love and War is now available in bookstores or online at www.persiablues.com. Listen to the full interview on WCBE (90.3) Wednesday, March 16th at 8pm.