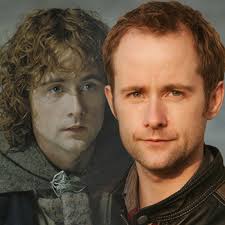 One of my favorite exchanges in the first Lord of the Rings movie occurs after Aragorn tells the hobbits to stop eating and get walking:
Aragorn: Gentlemen! We do not stop ’til nightfall.
Pippin: But what about breakfast?
Aragorn: You’ve already had it.
Pippin: We’ve had one, yes. But what about second breakfast?
Merry: Don’t think he knows about second breakfast, Pip.
Pippin: What about elevenses? Luncheon? Afternoon tea? Dinner? Supper? He knows about them, doesn’t he?
Merry: I wouldn’t count on it.

At the end of my talk with Pippin actor Billy Boyd about his appearance at the Columbus Comic Con and the beauties of Scotland, he asked about good places to eat in Columbus. Sadly, I had little to offer because I’m too cheap to go out to eat much. So listen to the podcast and then help him by tweeting your favorite Columbus eateries to @BillyBoydActor.