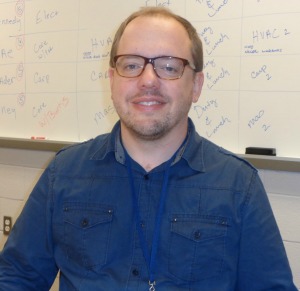 What if I told you Superman was real? Or that some characters in the Superman comic book series were real?

At the 2014 Ohioana Book Festival, Craft summer intern Kayla talked with the good-humored Brad Ricca, author of Super Boys: The Amazing Adventures of Jerry Siegel & Joe Shuster- The Creators of Superman, which recreates the adventures of Superman’s original writer and illustrator, Jerry Siegel and Joe Shuster. Ricca spent years exploring the lives of Siegel and Shuster, starting with their  Great Depression origins. Her interview with Ricca reveals some of the facts he found that not even the living relatives of the two creators knew.

Even if you aren’t a comic buff, Ricca’s personality and passion for comics fills the readers in on the interesting history of the comic and the creators in their youth. Hailing from the city of Cleveland, Ricca earned a Ph.D. English from Case Western Reserve University. He was recently awarded a 2014 Cleveland Arts Prize, and he has been invited to share  his knowledge of comics in publications such as The New York Times, Boston Globe, The Wall Street Journal, and others. Super Boys was declared one of the top ten arts books of 2013 by Booklist and received praise from Stan Lee former chairman and president of Marvel Comics.

As Kayla says, “It was fairly nerve-wracking to meet the author acclaimed by Stan Lee himself, but Ricca is easy-going and comical in the best kind of way. He made me realize just how important comic books, Superman, and Stan Lee are to the world.”