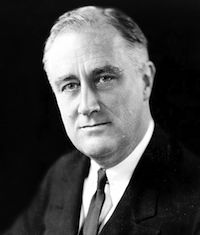 “‘That’s what presidents do these days,’ we think nowadays, ‘They cover things up.'”

James Tobin, professor of Media, Journalism and Film at Miami University and speaker of the above quotation, offers The Man He Became: How FDR Defied Polio to Win the Presidency, a fascinating look into the presidency of Franklin Delano Roosevelt, one that seeks to discover why a belief has arisen in the past few decades that there was a conspiracy to keep quiet about Roosevelt’s polio.

Tobin’s research into the changing legacy of FDR leads him to hypothesize that scandals and cover-ups by presidents from JFK onwards have jaded our views towards presidents, making the American public all too ready to believe that conspiracies exist at all levels, now and in the past.

Tobin will speak at the Thurber House on June 17.

Listen in to learn more about FDR and how he learned to live with polio.