Ohio author Celeste Ng is the 2018 Ohioana Fiction Award winner for her book Little Fires Everywhere. Listen in as we discuss what it’s like to win an Ohioana award; how she ensured that she got the details right about the setting for her novel, Shaker Heights, Ohio; and how she deals with seeing her own books or those of her friends in a bookstore.

And here’s the picture we discuss during our talk of a display in an Ireland bookstore. 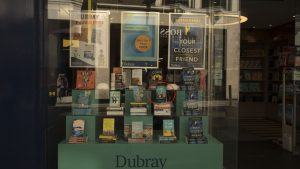 Henry Alford: So you think you can contact improv?

Did your school have mandatory square dancing lesson? Mine did, which may be why I’ll never wear western plaid again.

Humorist and participatory journalist Henry Alford has not only written for The New York Times, The New Yorker, McSweeney’s, Vanity Fair, and the Paris Review but also survived elementary school square dancing lessons. His most recent book, And Then We Danced, details his recent experiences to enjoy dancing lessons. Listen in while he describes the process, including his now-signature move while doing contact improv.

Alford won a Thurber Prize for his book Big Kiss, which detailed his acting career. Other books include How To Live: A Search For Wisdom From Old People (While They Are Still On This Earth) and Would It Kill You To Stop Doing That?: A Modern Guide To Manners.

She’s one of Ohioana’s authors for 30 Books in 30 Days, so catch Mary Kay Carson on our YouTube Channel!

One of my favorite exchanges in the first Lord of the Rings movie occurs after Aragorn tells the hobbits to stop eating and get walking:
Aragorn: Gentlemen! We do not stop ’til nightfall.
Pippin: But what about breakfast?
Aragorn: You’ve already had it.
Pippin: We’ve had one, yes. But what about second breakfast?
Merry: Don’t think he knows about second breakfast, Pip.
Pippin: What about elevenses? Luncheon? Afternoon tea? Dinner? Supper? He knows about them, doesn’t he?
Merry: I wouldn’t count on it.

At the end of my talk with Pippin actor Billy Boyd about his appearance at the Columbus Comic Con and the beauties of Scotland, he asked about good places to eat in Columbus. Sadly, I had little to offer because I’m too cheap to go out to eat much. So listen to the podcast and then help him by tweeting your favorite Columbus eateries to @BillyBoydActor.

Thomas Ian Nicholas: From actor to producer to musician

Actor Thomas Ian Nicholas has appeared in many films, starring in Rookie of the Year and playing Kevin Myers in the American Pie franchise. He’s also a musician, producer, and writer.

His latest work in production involves magicians and vampires, as well as traveling the country meeting his fans at Comic Con. Listen in for his description of a life in the arts.

You can meet Thomas Ian Nicholas in person on June 8th and 10th at the Columbus Comic-Con. 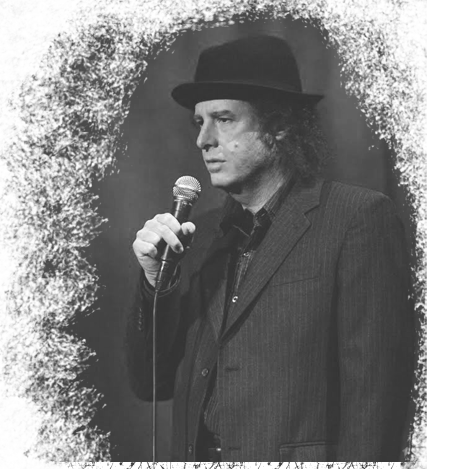 Steven Wright is one of a handful of comics I’ve paid to see perform live, although that says more about how cheap I am than it does about comics.

At any rate, it was great to talk to him and find out how he found his comic voice, what makes him laugh and what the favorite joke he’s written is.

Steven Wright will be in Columbus on May 19 with CAPA.

CEO and founder of Geben Communications, Heather Whaling is a fan of social media, not a surprise given her occupation. So the recent news about the Facebook privacy problems were of particular interest to her. Listen in while she describes the best ways for you to stay safe online as well as who her favorite social media accounts to follow are. We also discuss the best way to prevent yourself from being obsessed with social media (warning to teenagers: the phrase “remove from your phone” is used).

John Gorka: The past never dies. It comes back as songs

For legendary singer-songwriter John Gorka’s new album, True in Time, he casts his mind back to the past, with songs that explore memories and those we’ve lost.

Join us as we discuss his songs and his songwriting.

John Gorka will perform in Columbus on Friday, April 20 at the Kings Art Complex with Six String Concerts.

Posted in Craft guest follow up, Events to attend, Original Craft Productions, Singer-songwriters, Six String Concerts | Tagged John Gorka | Comments Off on John Gorka: The past never dies. It comes back as songs

Like many of us, Alberto Cairo is a polls-junky. Whenever election season comes around, he gets locked into the numbers. But for Cairo, it’s not just a seasonal passion; he’s devoted his academic studies to graphical representations of data in news media. Currently, he teaches data visualization at the University of Miami.

Cairo became interested in data visualization after a professor noticed his ability to create quick, rudimentary sketches. The professor recommended Cairo for an internship in a graphics department for a newspaper in Spain. He was unfamiliar with data visualization when he started, but loved the field after the internship. Since his college days, he’s written two books on the subject and runs a blog called The Functional Art.

On April 15, 2018, Cairo will deliver a talk called “Visual Trumpery” at the Ohio State’s Science Sundays lecture series, a free and open to the public event. Cairo initially called the talk “How Charts Lie,” but thought it was too dull and didn’t have the draw, so he retitled it to include the word trump, meaning showy but worthless, because it’s related to the current president’s name. However, he asserts the lecture is relatively bias-free and draws on bad graphs and data from the right and the left. His primary goal is to show people how to spot the fake data and charts and to teach people how to create better, more accurate visuals.

Cairo likes to talk about percentages and how they translate to a graph. He mentions that at some point during the 2016 election, Donald Trump had a 17% chance to win the election. This statistic seems low but Cairo likens this to rolling a “1” on a six-sided dice. Cairo believes including examples like this on charts will help people discover more interesting things and understand the magnitude of data.

According to Cairo, the world of charts and graphs is simultaneously improving and getting worse. Because of the Internet, there’s a lower barrier of entry to creating and disseminating charts and graphs, which means anybody can make a figure that says anything they want. However, reputable news magazines on the right and left are using these tools to create better data-driven charts and stories.

Listen in for more about visual trumpery and then attend Professor Cairo’s talk.

Ohio State University alum Michael Kardos had a problem. How could he keep his son busy while he was writing? The solution: promise to write story chapters for his son if he played quietly for a time. In a classic case of unexpected benefits, Kardos discovered that writing for his son made him realize the importance of writing for a sense of wonder.

Moving from writing for his child to writing for an adult audience, Kardos kept the sense of astonishment and trained it on the world of magic, specifically how a magician, already a has-been in her twenties, can find new ways to use her skill, those hundreds of hours of practice.

Listen in to hear the secrets of the trade from a former magician and full time author.

Posted in Original Craft Productions | Comments Off on Michael Kardos: A book so good, it’s magic