Mark Erelli: How to grab an audience’s attention softly 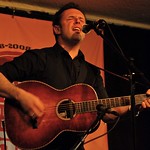 Singer-songwriter, multi-instrumentalist Mark Erelli has released 16 CDs, 6 collaborative and 10 solo, including his most recent For A Song, his first solo album of original material in six years.

During our conversation, we talked about the ways that crowdfunding is changing music, how Lyle Lovett impacted his performance style, and why snowstorms are the songwriter’s blessing.

He’ll be in Columbus on Friday, January 20th with Six String Concerts.