Junk: It’s not what you think 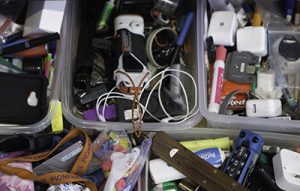 Most likely it’s what you think you need to throw away.

But for the organizers of Junk Bash, it’s something to be treasured. According to Mercantile Fairs Director of Operations and Outreach Suzanne Perreault, Junk Bash brings together people with a very different definition of junk.

“When we say it’s junk, we mean it’s something we want to reclaim,” Perrault says, redefining junk as something precious and useful.

Junk Bash will take place on March 24th and 25th at the newly built Cardinal Hall the Ohio State Fairgrounds. Junk Bash will feature a number of Columbus area crafters and reuse experts like the Ohio Creative Collective, and Baskets by Viva, Nadderdoodle, Wicked Stitch of the West, and Elemental Carbon.