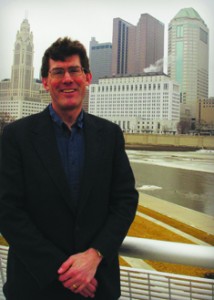 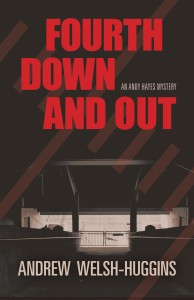 When was the last time you told Columbus she was pretty? Andrew Welsh-Huggins, July 9th Thurber House author, values the beauty and intrigue of Columbus so much that when he based his novel, Fourth Down and Out, on a disgraced Ohio State football player, he was proud to walk Columbus’s streets to accurately portray every last brick of his beloved city. As he said during our talk: “When it came time to set scenes in German Village I went down to German Village: I walked the streets; I walked in the day; I walked them at night. I wanted to get a completely accurate feel for them.”

In one of his first fictional pieces, Welsh-Huggins follows private-eye detective, Andy Hayes, into a case involving a scandalous video that has already caused one person to die. Faced with the opportunity to crack his current case, Andy must trace the clues back to the university where he fell from fortune years ago. Although Andy’s situation might remind readers of instances in the news revolving around scandals in college football, Welsh-Huggins says, “Unfortunately, there are a lot of role models not just at Ohio State but at universities around the country for football players who fell on hard times. So first of all, it’s fiction. And second, Andy’s history is a starting point, and so people probably will recognize certain characteristics of him in maybe their own heroes who fell on hard times.”

If you are a fan of his work, it wouldn’t surprise you that Welsh-Huggins counted steps in the football stadium to get his facts straight even for a fictitious story. As a legal affairs reporter for Associated Press, he’s used his eye for detail to produce two previous books: Hatred at Home: al-Qaida on Trial in the American Midwest and No Winners Here Tonight: Race, Politics, and Geography in One of the Country’s Busiest Death Penalty State. His research for Hatred at Home required piecing together the evidence for three trials of men accused of terrorist involvement right here in Columbus.

While No Winners Here Tonight used policy and history to combat the idea that Ohio’s death penalty laws are just. No matter the story, Andrew Welsh-Huggins delivers a thought-provoking tale that is honest and believable, making the city of Columbus proud to call him local.