Kanon Brings Questions, Not Answers, In Visit to Columbus 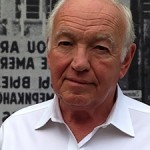 Some writers claim to have all the answers. Joseph Kanon isn’t one of those writers. The NYT bestselling author is bringing more questions than answers with him to Columbus when he visits Thurber House Evenings with Authors on Thursday, March 12.

In his career thus far, Kanon has focused on the period shortly following the end of World War II. He explains the period as “an endlessly dramatic” time because of WWII’s significant place in western history.

More than just important or dramatic, Kanon characterizes WWII as “the real hinge of the [twentieth] century.”

Kanon’s newest novel, Leaving Berlin, explores Soviet-occupied East Germany in 1948. “This is a society on its knees, and, consequently, lying is second nature. Survival is everything.” Within this scene, Kanon sees and creates situations of immense moral compromise.

Through the conflicts approached by his characters, Kanon poses difficult moral questions. “Where do you draw your own line? Where do you create your own personal morality?” Kanon finds the questions interesting, but necessarily offers no answers.

While his morally ambiguous writing has stayed within a fairly tight chronological window, Kanon has taken his fiction back and forth across the Atlantic Ocean.

The author recounts a recent visit to Berlin with his wife: “As we were walking along, I said, ‘Oh, this is the flat where Irene would’ve lived,’ and ‘This is the place where so-and-so worked.’”

Kanon’s wife looked to him and responded, “You know a lot of people here: it’s just that you’ve made them up.”

The story exemplifies Kanon’s interest in people within specific settings. “It’s important for me to really place people.” Understanding the places that characters encounter makes them real.

“I find that all of my books, in one way or another, begin with place.” Places that Kanon doesn’t know about are the ones that intrigue him. Places he understands are less interesting: “I live in New York. I have no intention of writing about it. In a sense, I know about it.”

On March 12, Kanon brings his morally intriguing fiction to a new and mysterious location when he’s a featured author at the Thurber House Evenings with Authors.