Tracy Chevalier: at the edge of the orchard and history 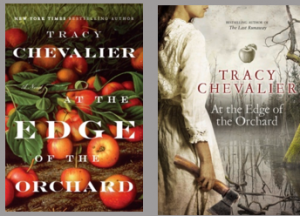 It’s not often that trees, orchards, and apples find themselves at the center of a conflict, but that is exactly the case with Tracy Chevalier’s newest novel, At the Edge of the Orchard. The book follows the saga of the Goodenough family in 19th century America from a northwest Ohio orchard to Gold Rush Era California. Chevalier will read and discuss her novel at the Thurber House on Monday, March 21st.

Chevalier regularly places historical figures into her fiction pieces, believing that it adds a new and believable element to her stories. “I like to have them in the book because it provides a kind of verisimilitude to everything around them,” Chevalier said during our discussion. At the Edge of the Orchard includes characters inspired by real people like Johnny Appleseed and William Lobb.

Appleseed, escaping from children’s songs, is more of an actual human being instead of a mythical character. Chevalier keeps his strange clothing and vegetarianism, but her Appleseed is a sharp businessman. Similarly with Lobb, an English naturalist and botanist, who spent time in California in the 19th century and collected and sent saplings to an English nursery that focused on exotic plants and trees.

“He anchors the California section because he really did exist,” Chevalier said of Lobb, “There are a lot of things about him and what he did that I could really draw upon and weave into the more fictional elements of the story and give them some veracity and authority.”

Just as historical figures can add weight to a story, Chevalier believes in truly knowing her settings. In writing the book, Chevalier traveled to Calaveras Grove in California to put herself in the same landscape the Goodenough family would have experienced. Calaveras Grove is the home of giant sequoias, the incredibly wide trees whose 30-foot diameter trunks are famously hollowed out to allow cars to pass underneath. Chevalier found herself marveled at the smaller, more intimate details that could only be picked up on if actually present in the grove. From observing the ways people looked at the trees to the decades-old piles of pine needles, Chevalier captured the essence of what it’s like to experience a location in person.

“I like to actually be [at my settings],” Chevalier continued, “It’s the difference between seeing a painting online and actually being in the room with it.”

Tracy Chevalier is the author of eight novels, including Girl With a Pearl Earring, which was an international bestseller and adapted into a major motion picture. Her newest novel, At the Edge of the Orchard, is now available in bookstores.