David Myles: a man out of time 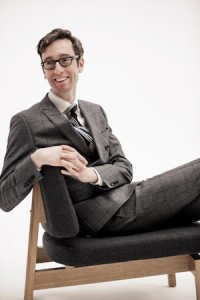 For Canadian singer-songwriter David Myles, time is always of the essence. The musician’s songs transcend decades, genres, and influences. Known as an “acoustic guitar crooner,” Myles does not let any label restrict him, as he explained in his Craft interview.

Growing up on a healthy dose of Chet Baker, Paul Simon, and Willie Nelson, Myles found inspiration everywhere. Though he played trumpet through his adolescence, he found his love for singing in an unexpected place: a Chet Baker cassette tape. He got his hands on acoustic guitar, learned some three chord songs, and began looking at music in a more serious light. Speaking about his vast influences, Myles said of his music, “It’s really kind of a mix. Now I found myself between all those things.”

One of his best folk known songs, “When It Comes My Turn,” was nominated for a heap of awards. The track is one of his earliest written tunes and was recently re-recorded in Canada for his newest compilation, So Far. According to Myles, the track had very humble beginnings. “I wrote it on a bus,” Myles continued, “in my quarter-life crisis.” Myles wrote the song as he was finishing up college, feeling on the brink of a new chapter in life. Though it was intended to resonate with younger people, Myles has found that it holds a special place for those closer to his parents’ age, or on the verge of a different life chapter: retirement. “It’s been interesting to see what you think the meaning of the song is going to be when you put it out, but it changes over time,” Myles explained.

Though he is best known for his folk music, Myles is not afraid of stepping well outside of the genre. In 2008, he collaborated with Canadian rapper Classified to create “Inner Ninja.” The song, fusing folk-fueled hooks with hip-hop flow, went quadruple platinum in Canada and has become a live staple for Myles on tour. “For any songwriter at any time to have a hit is a very exciting thing,” Myles explained. “It’s a different feeling. You can feel it percolating.”

The Guardian touted David Myles as “one of Atlantic Canada’s most highly regarded singer-songwriters.” His music has won several accolades, including the coveted Juno award given to top Canadian music. Myles will be at the Six String Concert series on March 4th.